In my devotional time yesterday, I read that the cycle of darkness and light were established before the sun and the moon. That, spiritually speaking, we live our lives within the cycle of bright noonday sun and the gloom of midnight. I believe it, although I would probably break it down further, I think we live in spiritual and emotional seasons. We love our Springs and Summers but don’t love the dying of Autumn and the death of Winter, yet we all face them in repeated circles of death and regeneration.  The trick is to remain centered, at peace, within all of the changes; and to keep moving forward, alive, productive within those movements. Either that or you put your head down and endure, or just try to change your circumstances.  These latter options are not left open to Christians. We are called to take up our cross (season) and bear it, following Christ. 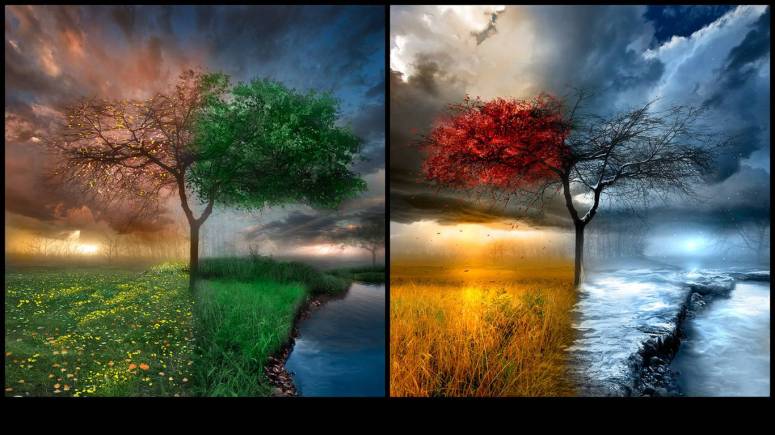 I have a dear friend who is facing a difficult season right now. She is so busy she barely has time for anything outside of the tasks before her. She’s like a squirrel in Autumn, constantly moving and storing up, preparing for whatever the next seasons of her life bring to her and her family. And those seasons are lining up at her threshold. Yet, as busy as she is, I seldom see her without a smile, a ready laugh, a twinkling eye, an encouraging word. She knows the secret and it maintains her joy even when she has no time to stop and smell the roses.  She has learned two very important things: One is that seasons change, we can all learn the hope that comes from that truth. The other is that she has learned to see God in the ordinary things within every season. Because she is aware of the Divine in the details, rather than that other guy, it makes every i she dots and t she crosses, every contract signed and appointment made, every success and seeming failure a prayer and an act of worship. She is living the Church of Jesus in Autumn. Her joy still allows her to help her friends in need and to love her brother and sisters who are so inspired by her resilience and faith.

I have another friend who is one hundred days sober today. That sentence itself is a victory but there is so much more to his story. A few years ago he was an anxious, self-medicating cynic, trying to hold together his home because that’s ‘what men are supposed to do.’ His marriage was rocky and his family was in danger of collapse, but he stuck it out and furthermore went looking for answers, which he found in Christ. Through a long hard season of darkest Winter he sought for truth, and when he found Him, a new green Spring began. Now every moment with his family is a moment of the celebration of new life and the wonder of growing hearts and minds. He smiles a lot now. He hugs a lot now. He loves his wife with abandon. The season he is living is one of celebration. But my friend sees that Spring and Summer give way to lesser things. He keeps working on making things better, not taking the flowers for granted, he enjoys them but looks to the future, finding the correct path into the next season of his life.

Sometimes circumstances dictate our seasons. Sometimes it’s people, or things that must be done. Sometimes God just decides you must walk through dark stormy nights or live it up on sunny Summer beaches, but in the end it’s the same. We look for Him, we live in the joy His divine/ordinary creation affords us no matter the season.